Weeds won’t have a chance along the Columbia Street section of the Brooklyn Waterfront Greenway. This ½ mile interim segment, established in August 2008, connects Atlantic Avenue, which will be the Pier 6 gateway to Brooklyn Bridge Park, to the neighborhood parks and piers of Red Hook.

On the weekend of November 21-22, 2009, a half-dozen energetic and hearty greenway volunteers worked to prep the site and plant it with a native grass seed mix. The existing weed root systems were extensive and deep, but perseverance prevailed! Most of the work involved completely digging out the root systems in a compacted gravel and clay mix, complete with bricks, concrete and tar pieces.

The team finished the area from Degraw Street to Sedgwick Street, and will continue further north along Columbia Street as part of Brooklyn Greenway Initiative’s next cleanup, to be held Saturday, December 12th. Keep an eye out for the results in the spring! 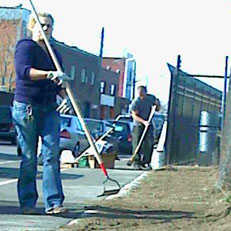