Now, northbound cyclists won’t have to mix with the heavy traffic on the south side of the BQE by going several blocks out of their way to get to Kent Avenue.

Read more and see more photos on Brownstoner and Streetsblog. Additionally, the improvements to the slope going up to the highway, which was recently restored with native grasses, transforms this segment of the greenway route from bleak to visually stimulating. 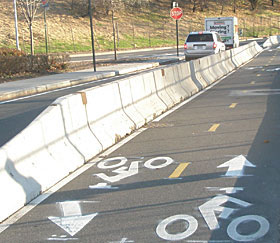