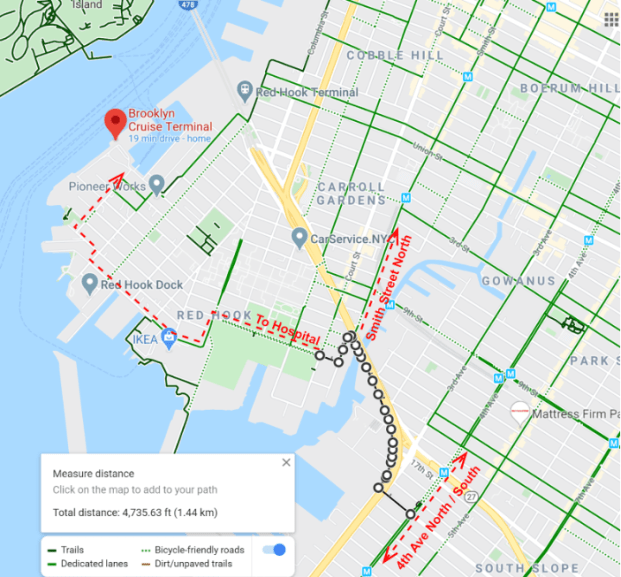 New York City Department of Transportation (DOT) needs to install a temporary protected bike corridor over the Gowanus Canal for essential workers from South and Central Brooklyn communities who are traveling by bicycle.

Biking is clearly having a moment in New York City as healthcare and other essential services personnel have turned to this versatile and reliable mode of transportation to get around. CitiBike docks near hospitals are packed. Bike traffic over East River bridges surged in early March and increased bike ridership throughout the city has continued into April.

Bike traffic has also increased significantly on the Brooklyn Waterfront Greenway, a linear-park-meets-transportation-corridor around the borough between Greenpoint and East New York. Brooklyn Greenway Initiative (BGI) – a nonprofit organization formed in 2004 as a catalyst to the construction and stewardship of the Greenway – is measuring bike and pedestrian traffic along the Greenway near the Navy Yard. This past Sunday, April 4 cyclist use was higher than any single day since we started collecting data last June.

Right now the Greenway is providing critical safe passage for people commuting to essential jobs and a safe space for solo exercise and stress-relief during New York’s PAUSE period. But this isn’t true where gaps in the Greenway remain, including on Hamilton Avenue over the Gowanus Canal and through its perilous intersection with 3rd Avenue. The Gowanus Connector segment of Greenway sits at a major crossroad of Brooklyn neighborhoods ill-served by transit and home to many essential workers still commuting during this public health crisis.

Now, as FEMA is building a temporary 750-bed hospital at the Brooklyn Cruise Terminal in Red Hook, the City must also provide a safe route for the doctors, nurses, maintenance staff, and other essential personnel who will need to reach this site. The Greenway provides access north of the hospital but connections lack from the south and east.

Installation of the Gowanus Connector will help frontline workers get to the new hospital and create critical safe connections to the Smith Street bicycle corridor leading north to the Manhattan Bridge, as well as to the 4th Avenue corridor to Sunset Park and further south to Bay Ridge.

Planning and traffic engineering for the Gowanus Connector have already been completed by NYC DOT, city capital funding is secured, and construction is scheduled for ground-breaking this spring. But with only days until the Cruise Terminal hospital receives its first patients, we don’t have time for the two-year capital construction. We need to implement it now.

NYC DOT has taken important first steps toward installing temporary protected bike lanes for COVID-related bike traffic increases, but has struggled to maintain and expand these “pop up lanes.” We acknowledge severe capacity constraints within city agencies right now and are sympathetic to the incredible work DOT Commissioner Trottenberg and her team are performing every day to keep this city moving.

If DOT is unable to install this temporary infrastructure, we must consider tapping alternative resources from the private sector who are eager to contribute to the relief effort and get back to work.

BGI is the City’s partner in planning and operations of the Brooklyn Waterfront Greenway. We are ready, willing, and able to leverage private sector resources to coordinate this essential work. There are numerous industrial businesses within a 1-mile radius of the Gowanus Canal that are equipped to install the protected lane per DOT’s plans.

By installing the lane with jersey barriers instead of plastic barrels, there would be little to no ongoing maintenance required, freeing up DOT resources for other needs. This durability of materials would also best serve New Yorkers who will continue to commute by bike as a safe alternative to crowded transit or private cars long after the immediate thread of COVID-19 has passed.

The Coronavirus pandemic is an unprecedented emergency in the history of our city and nation. Flattening the curve and getting through this crisis requires swift actions that deliver the greatest good to the most people. As the “backbone” of the borough’s bike infrastructure network, planning the Greenway has always focused on its utility during emergencies and always; immediately installing the Gowanus Connector is an opportunity to flex these intentions when we need them most and serve a broad range of New Yorkers in this time of crisis.

BGI stands at the ready to help our city and the tens of thousands of people who rely on the Greenway in the best of times and especially now as a critical piece of public infrastructure. Let us get this done together!

Terri Carta is the executive director of Brooklyn Greenway Initiative.