latest progress on the greenway

BGI is committed to the ambitious vision for 26+ mile Brooklyn Waterfront Greenway — an uninterrupted path of multi-use trails and linear parks tracing the Brooklyn waterfront from Greenpoint to East New York. We want to celebrate all the recent progress that’s been made on the Greenway – upgrades to the existing 20 miles, and the completion of new sections! Over the next few months, we’ll travel along the Greenway and share updates about what’s been done and what’s coming next. 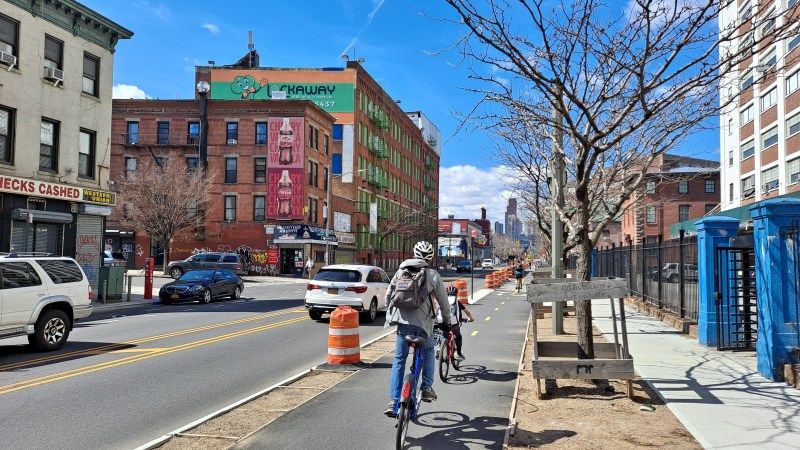 In December 2021, the two-way bike path on the southwest corner of the Navy Yard opened up to bicycles, capping an implementation process that spanned over 10 years! It’s now possible to bike over four continuous and low-stress miles from the Manhattan Bridge (via Sands Street) to West Street in Greenpoint with minimum interaction with car traffic. 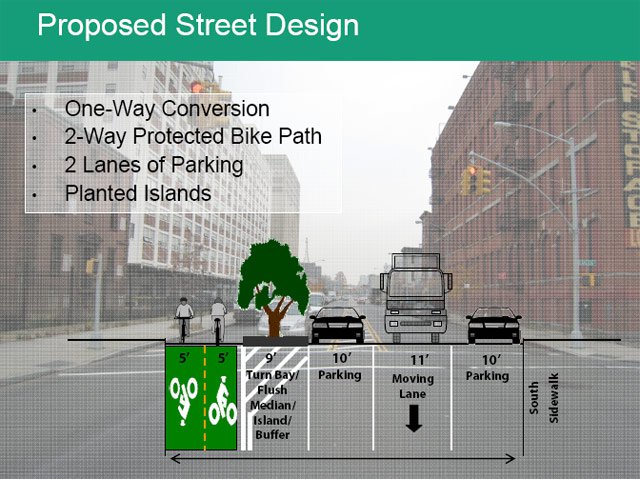 In terms of time, it’s one of the longest start-to-finish segments in the Brooklyn Waterfront Greenway. It certainly wasn’t meant to take this long! The city DOT originally sought to complete this as far back as 2010, with a plan to convert Flushing Avenue into a one-way, one-lane street for car and truck traffic (with two lanes of parking), and creating a two-way bike path separated from traffic with a median.

This plan was met with concern from local business and the community board, and the city came back with a two-phase approach: 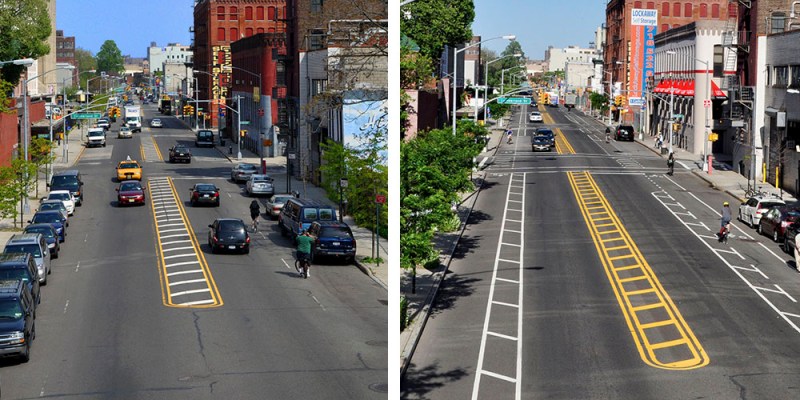 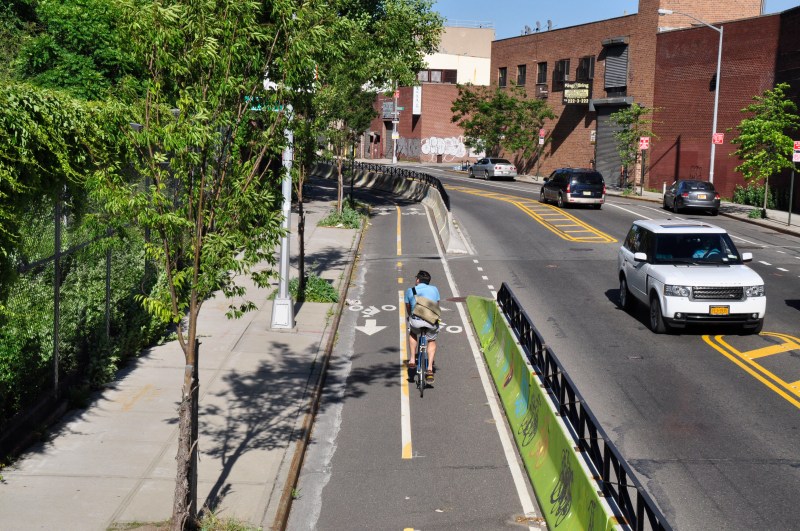 – Short-term: the DOT would add painted bike lanes on each side of Flushing Avenue between Navy Street and Washington Avenue, and a two-way bike path with concrete barrier protection from Washington Avenue to Kent Avenue. This was completed in the summer of 2010.

– Long-term: the north sidewalk would be extended by six feet, and a curb-separated, two-way bike path would be raised to the sidewalk level and run from Kent Avenue to Navy Street.

The long-term project was expected to be complete in 2-4 years by DOT, though Gothamist wrote at the time that it would likely take until 2020. 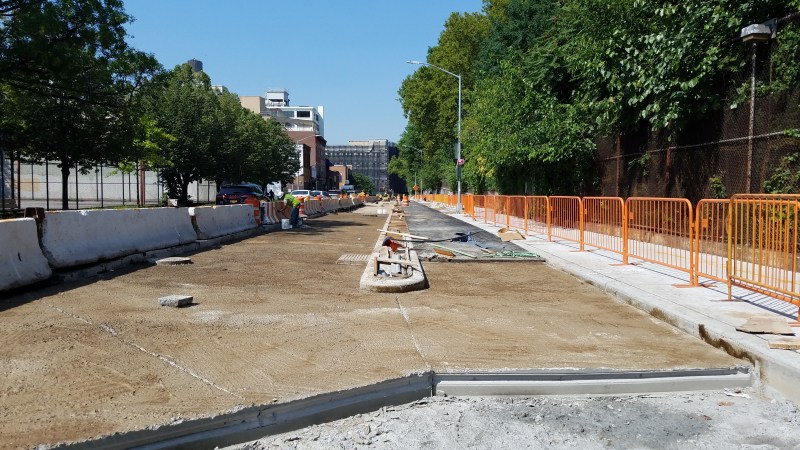 It turns out that Gothamist’s estimate was very close to the actual result – construction on the bike path finished at the very end of 2021, while construction on other elements of the project continues into 2022. 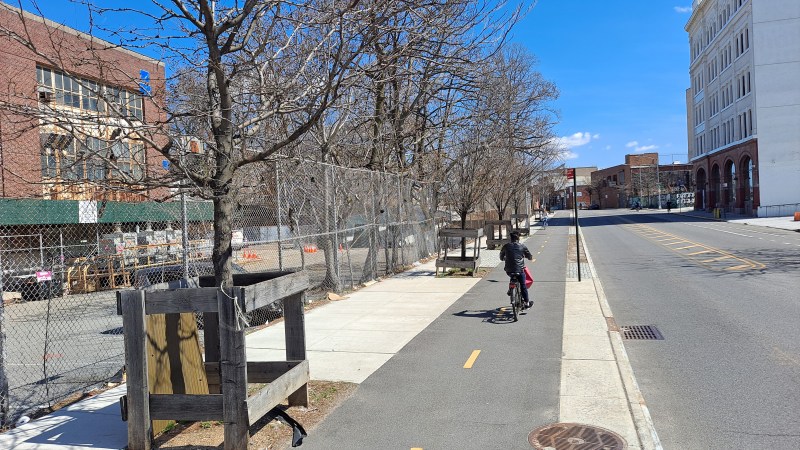 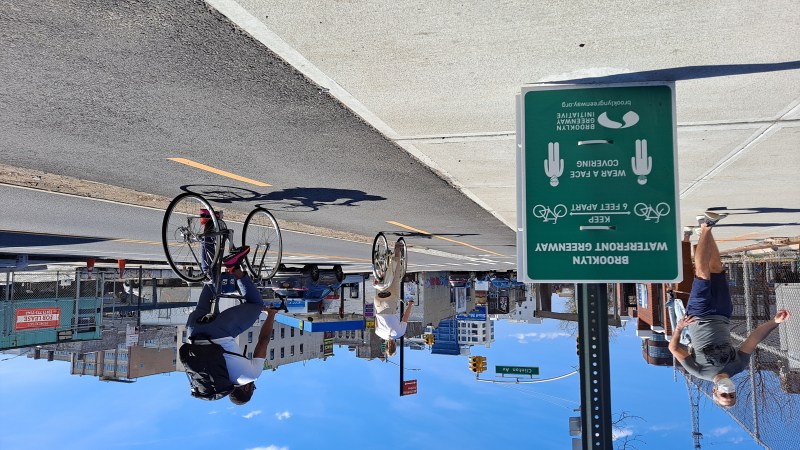 Over the course of the project, small segments of the two-way bike path opened further and further west. Construction on the greenway east of Vanderbilt Avenue was largely complete going into 2021. 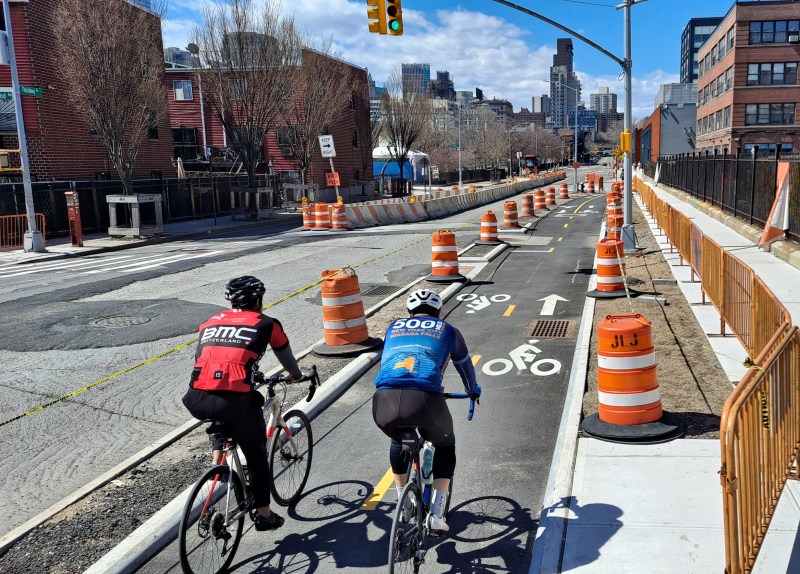 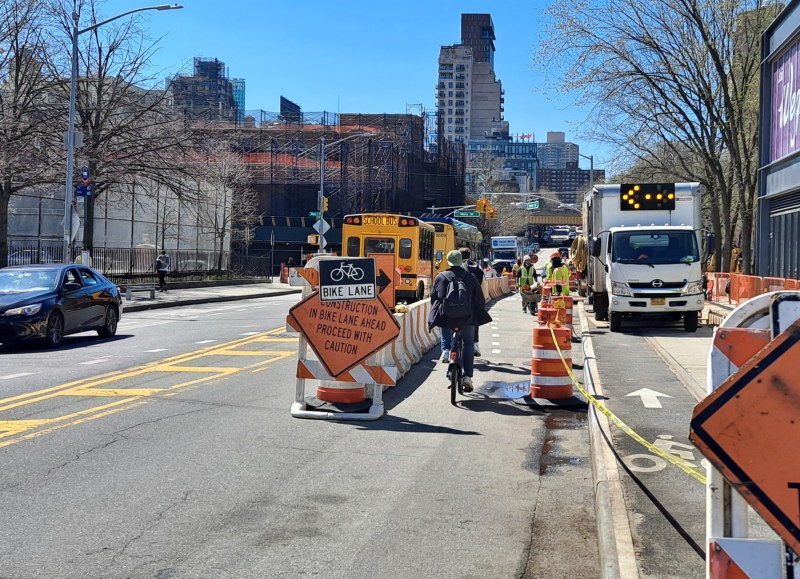 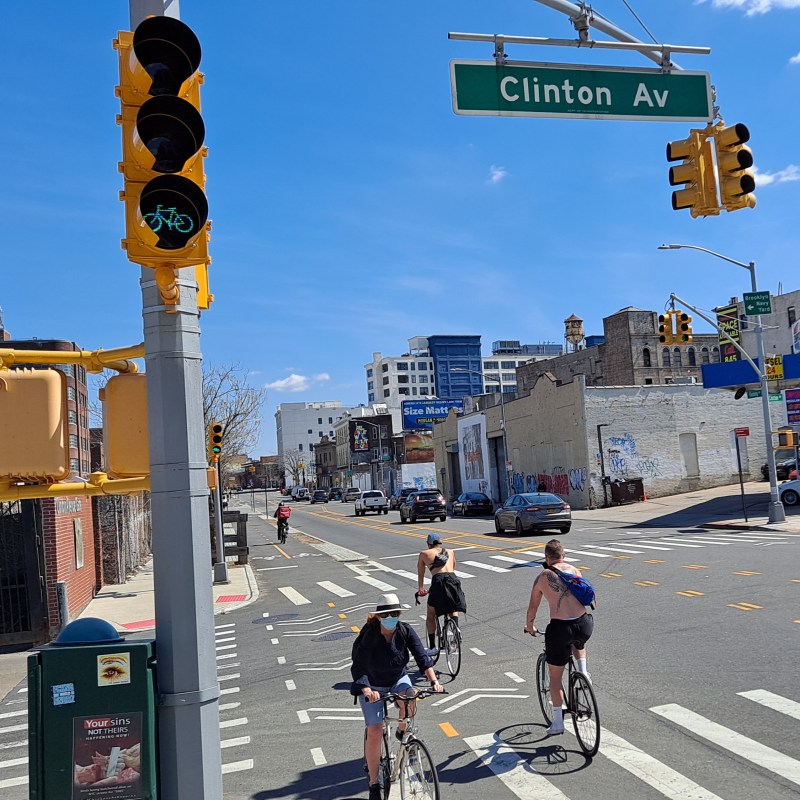 Bike signals have been added throughout the corridor, particularly at entrances to the navy yard. 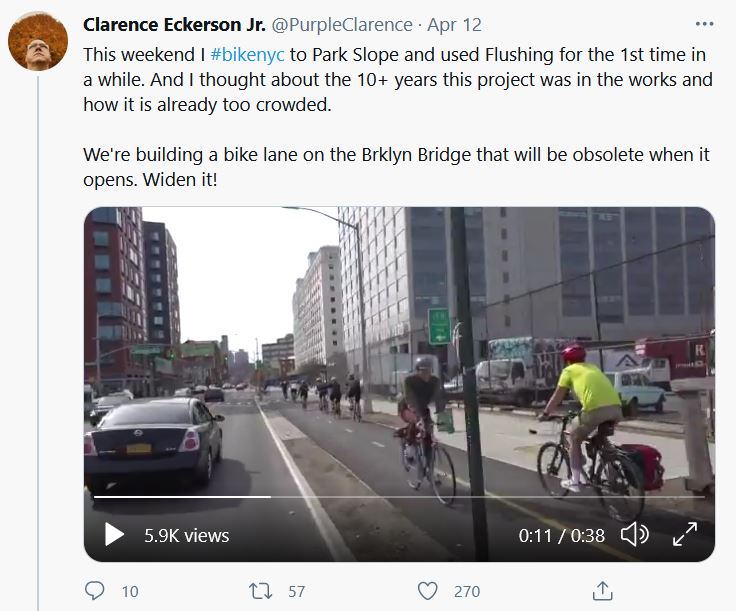 Greenway users have noted that the new path has unleashed far more pent-up cycling demand on the corridor than the path was designed for – a 2010 design standard being applied to 2021’s bike boom! It’s great to see so many people come out and use the greenway’s newest segment for transportation and recreation, and hopefully will lead to future-proof standards in greenway projects to come.

Tour of the first mile of the Shore Parkway Connector 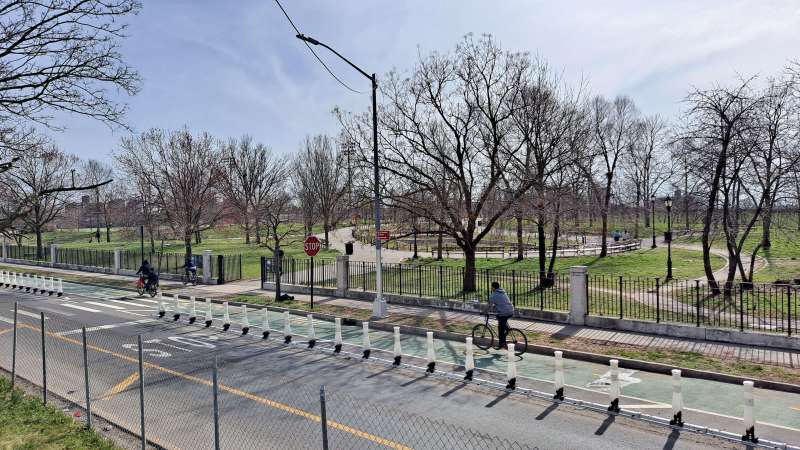 In September 2019, the NYC Department of Transportation put the finishing touches on a one-mile extension of the Brooklyn Waterfront Greenway along the Shore Parkway – from its old terminus at Bay Parkway, to Six Diamonds Park. Did you know that this marks the first step in executing the Shore Parkway Greenway Connector Master Plan? 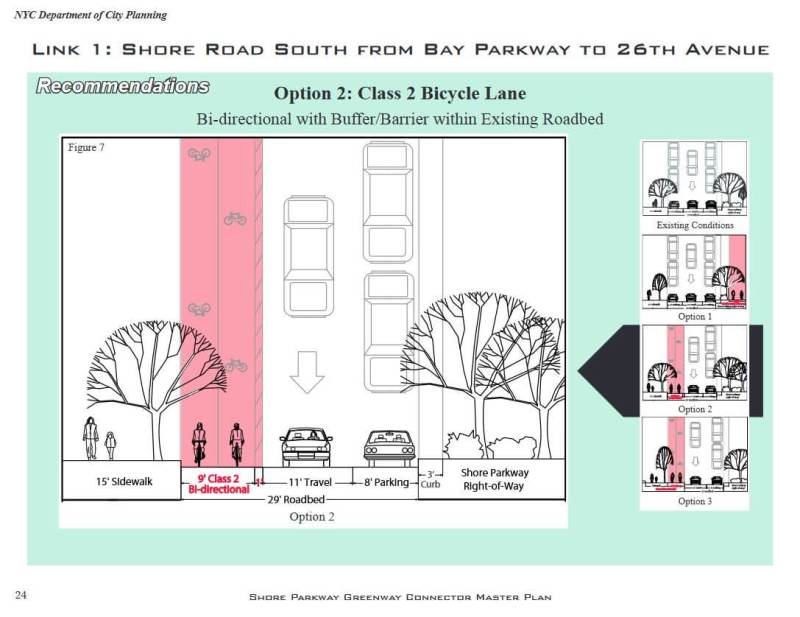 The Master Plan was issued by the the Department of City Planning in 2005, and looks to close what had been a 4.5 mile gap in the southern Brooklyn portion of the greenway – after Bay Parkway, the cycling route ran along a highway service road, over a short section of the six-lane Cropsey Avenue, and along the wide and busy Neptune and Emmons Avenues to the start of the Jamaica Bay section of the greenway at Brigham Street. 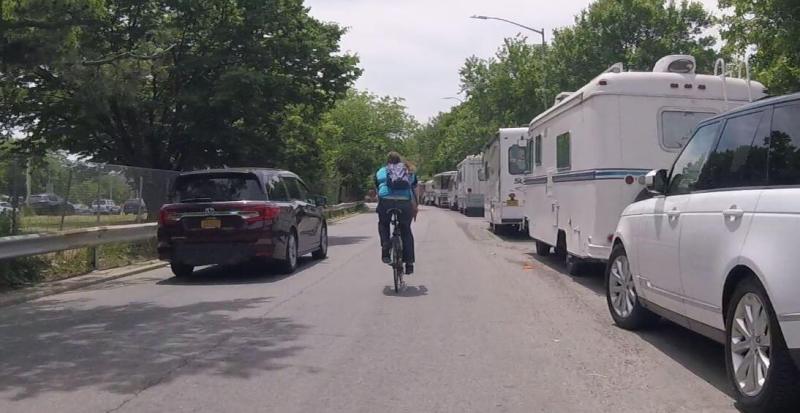 The 2019 extension eliminates the need for mixing with car traffic on the service road, and very nearly – though not quite – connects the greenway and Coney Island. Once the exclusive domain of bold road cyclists and sidewalk riding, the extension has created a calm environment that allows cyclists of all abilities to ride. 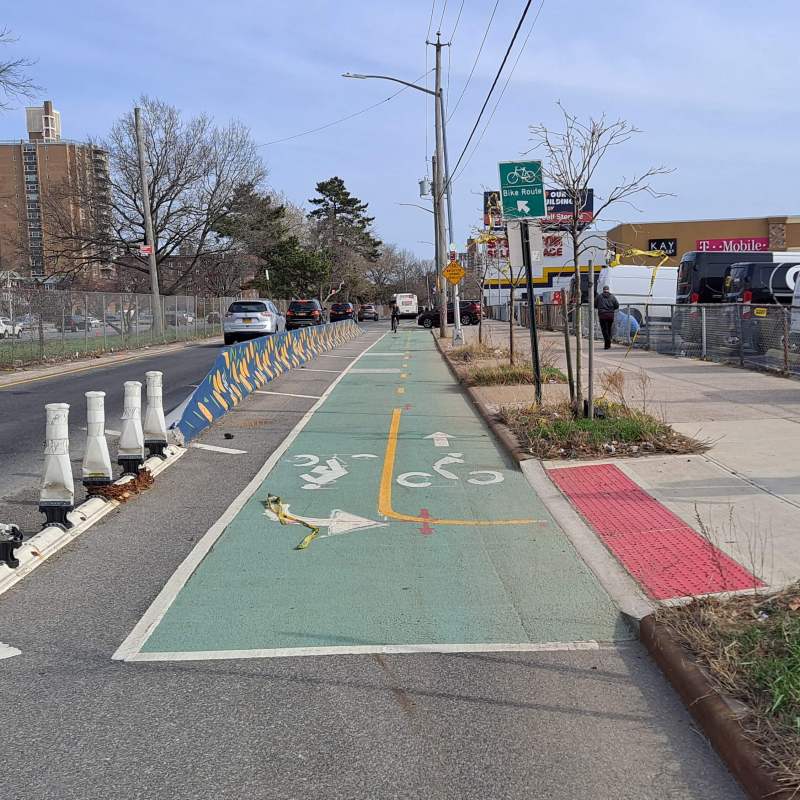 After a short section of shared sidewalk near Bay Parkway, the two-way bike path runs along the south side of the road, similar to one of the options laid out in the Master Plan. At various points, it is separated from moving traffic by parked cars, thick plastic bollards, and concrete barriers. 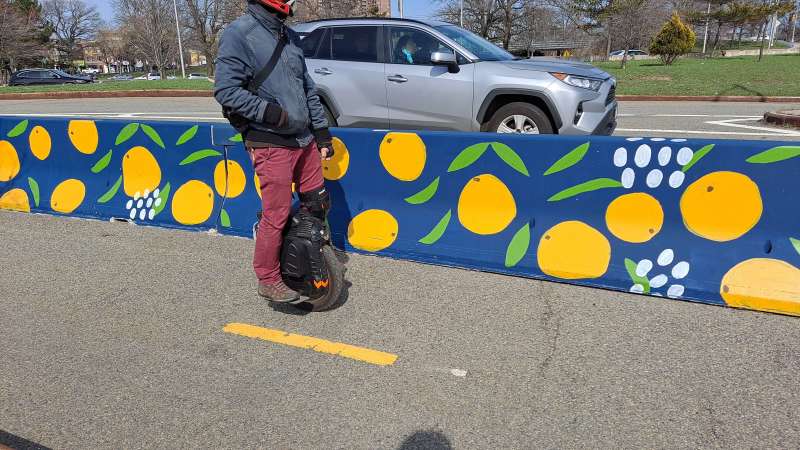 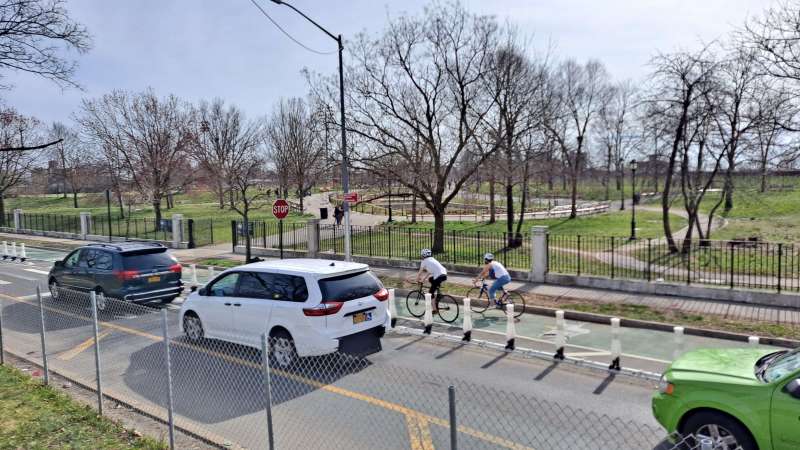 It also provides a direct connection to Calvert Vaux Park – a large open space with playing fields and kayak access named in honor of one of the landscaping partners that designed Prospect Park.

Have you seen it yet? In November 2020, the NYC Department of Design & Construction (DDC) substantially finished the separated bike path along Kent Avenue in Williamsburg!

As of today, some finishing touches remain to be done, and the DDC is still working on the vehicle portion of the roadway. Yet on the Greenway side, even much of the bikeway paint and landscaping is complete, and it is fully open for biking, walking, and running.

How did we get here? 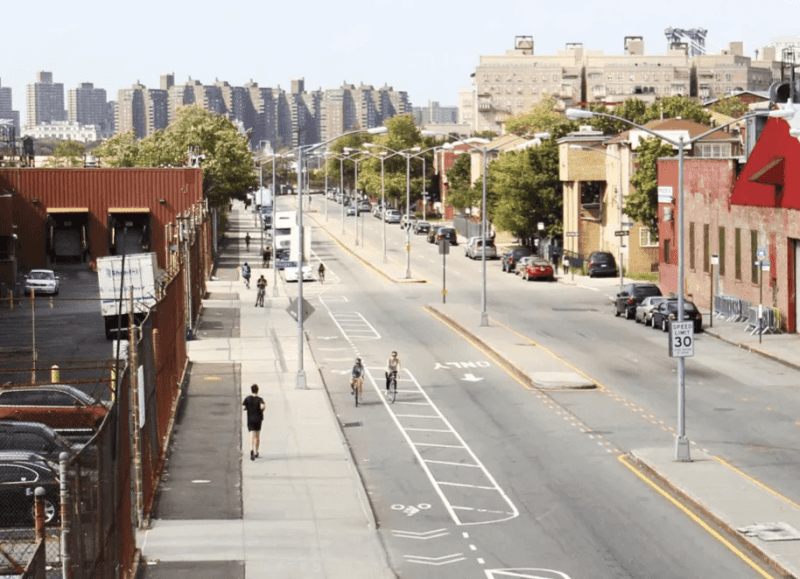 When the NYC Department of Transportation released its comprehensive implementation plan for the Greenway in June 2012, cyclists had to ride through Kent Avenue’s south corridor in an unprotected bike lane heading towards Williamsburg Street West, while northbound cyclists were directed to mix with pedestrians on the west sidewalk.

A May 2014 extension of the two-way bike path south of Clymer Street – separated by plastic flex delineators – resolved both of these issues… but only partly.

This path was plagued for years by incursions from drivers parking their cars, and in November 2018, the DOT presented a proposal to further separate the bike path from the vehicle roadway. 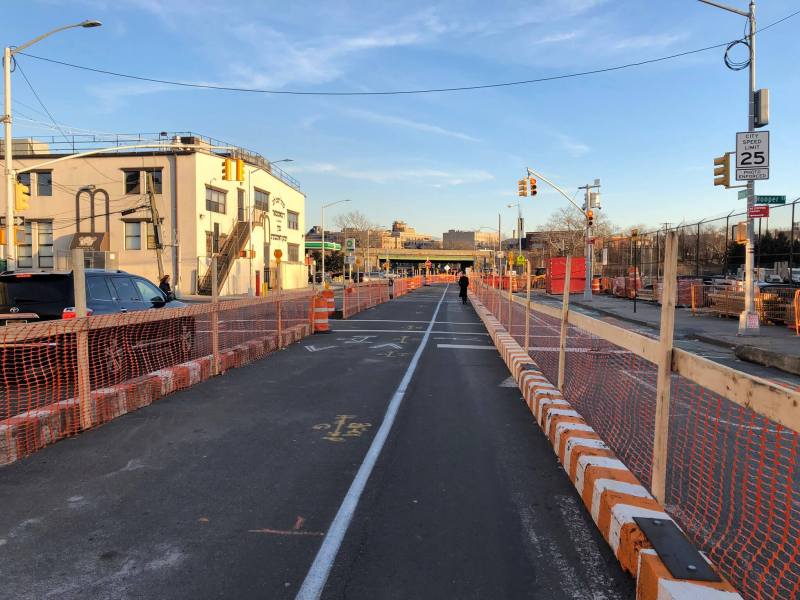 Construction took place in 2019 and 2020, with a well-protected temporary bike-and-pedestrian path established while the DDC built the permanent sidewalk and bikeway. And finally, by November, cyclists, pedestrians, and runners were able to begin using the new path. 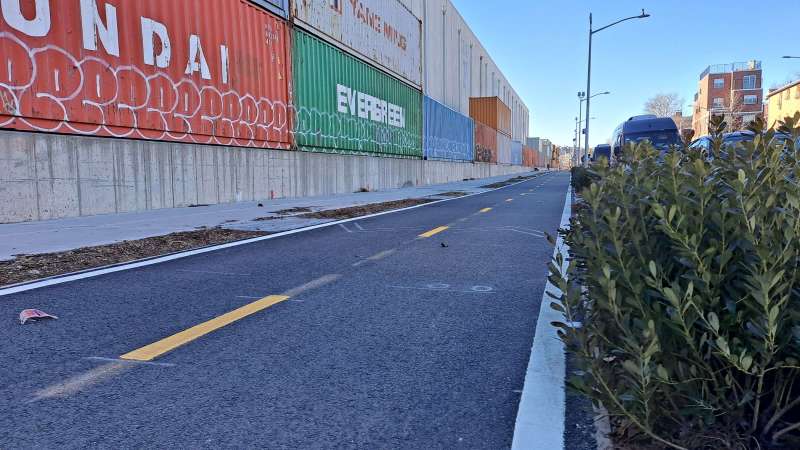 The bike path has been raised to the same grade as the sidewalk, and landscaping has been added along the edge of the curb – it is now much more difficult for drivers to violate the bike space with parked cars. 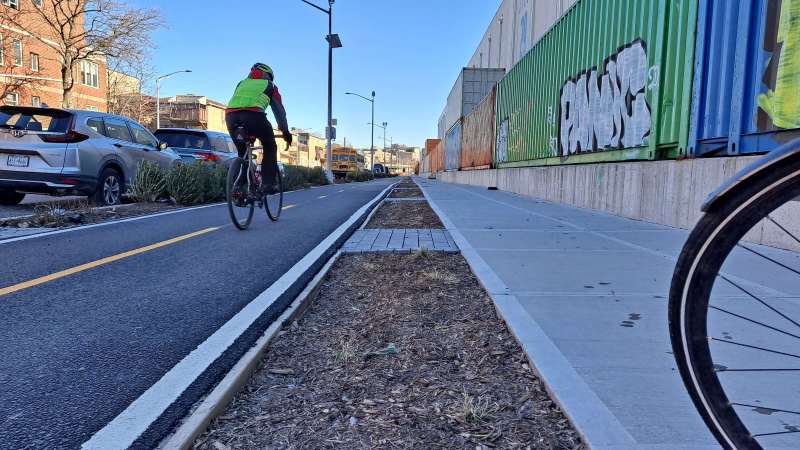 Further landscaping will eventually separate the bike and pedestrian spaces from each other, and will visually enhance the corridor. 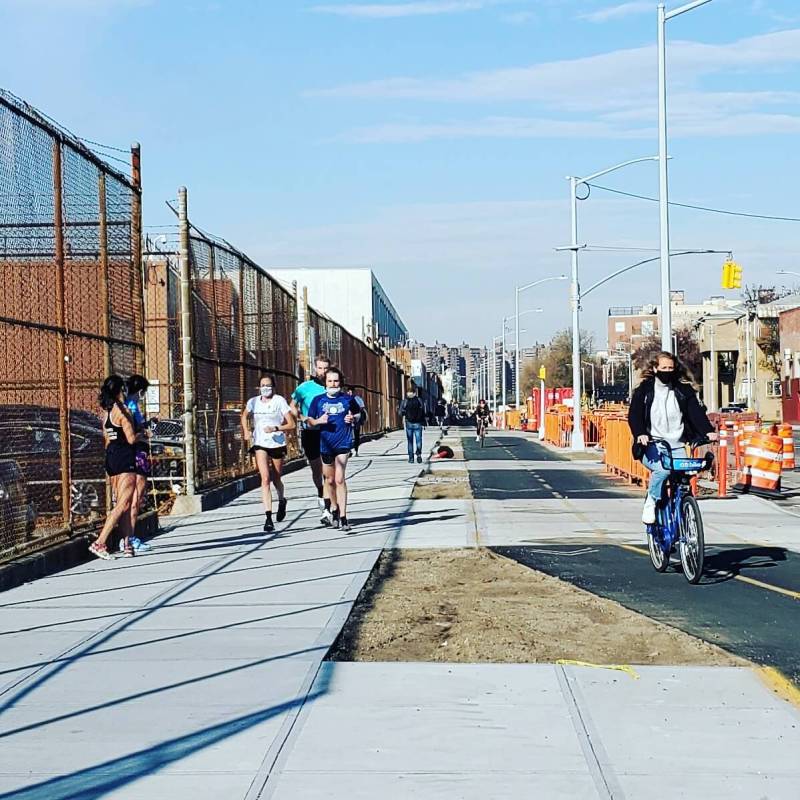 The new connector has been popular ever since it opened! And we can’t wait to see what Spring 2021 will bring! 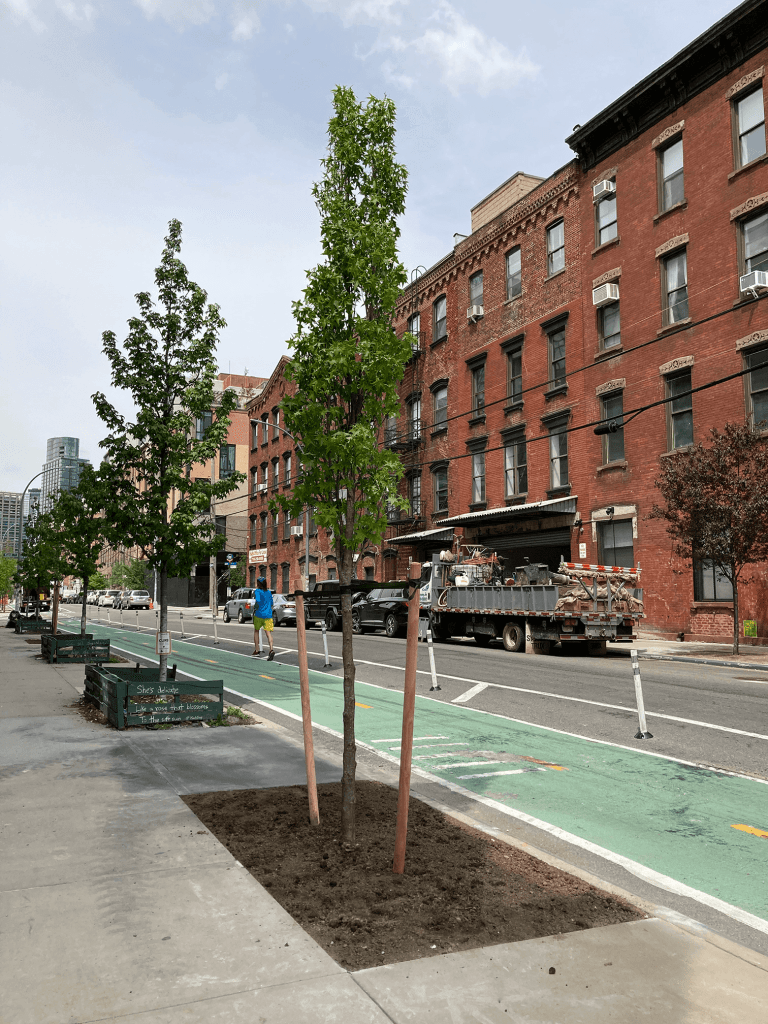 The West Street section of the Greenway is now in use! One of the northern-most sections of the Greenway, this segment offers access to on-street bike lanes leading to the Pulaski Bridge and into Queens. BGI partnered with neighbors to turn the southern stretch of West Street into an NYC Open Street on weekends last summer, and we plan to resume the program when the weather warms back up.

This short but mighty Franklin Avenue and Quay Street Connector segment was recently transformed from the old Franklin Avenue bike lanes into a single, protected bidirectional path that connects Greenpoint to Williamsburg. The newly built Greenway jogs onto Quay Street to link up with West Street. 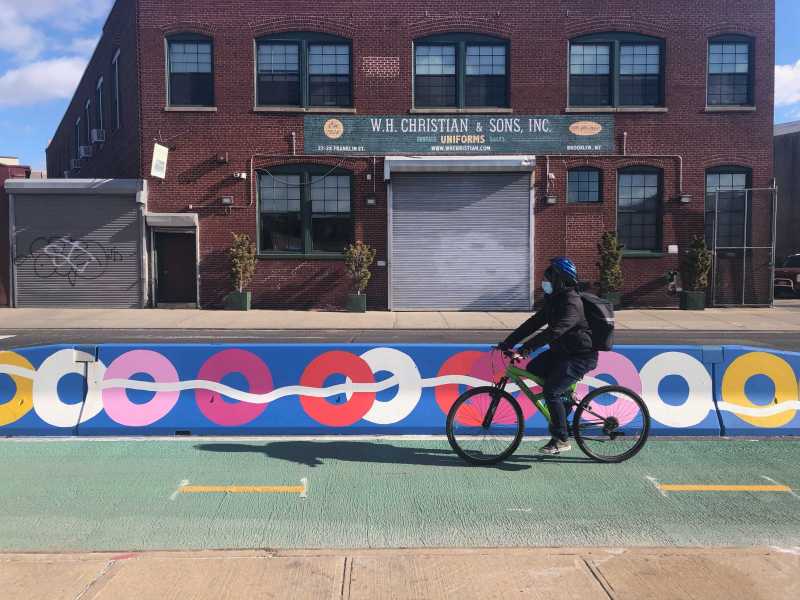 We love this bike barrier —  this whimsical mural was painted by Chilean artist Simón DeMadera as part of a public art program sponsored by the NYC Department of Transportation. 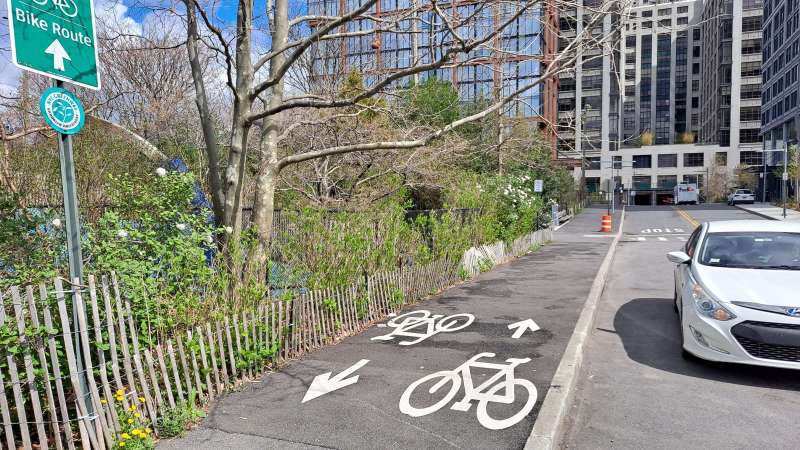 Even when greenway segments open up, they don’t stay static forever! That’s the case through Brooklyn Bridge Park and DUMBO, where some small but key updates have been made to make the experience more inviting. 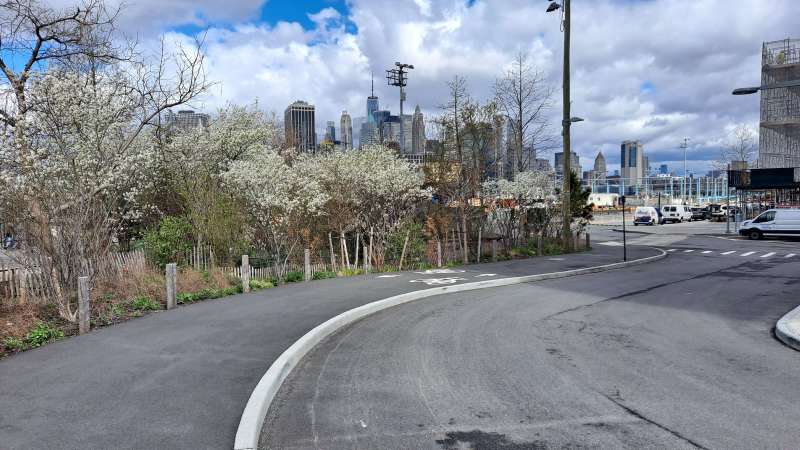 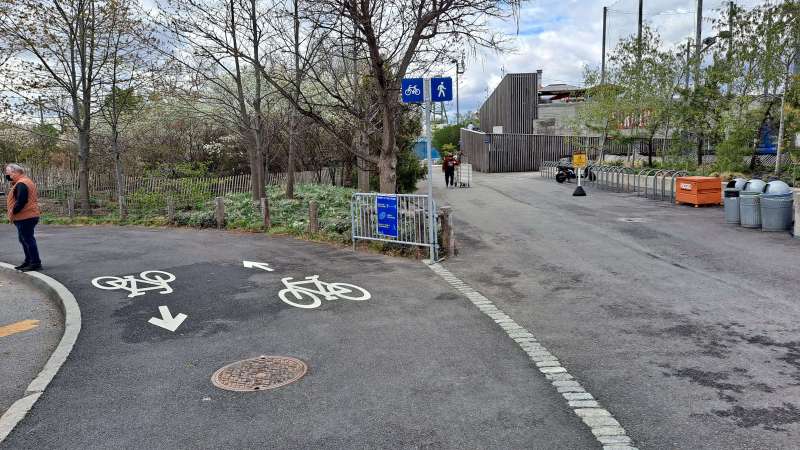 The biking entrance by Pier 6 has been rerouted away from the narrow pedestrian path between the Port Authority of NYNJ marine terminal entrance and the NYC Ferry landing, and now runs along Bridge Park Drive. The new path goes a long way in reducing bike and pedestrian conflicts on this part of the greenway. Just be sure to keep an eye out for it if you’re approaching from Atlantic Avenue, as some of the signage is conflicting and still points to the old path! 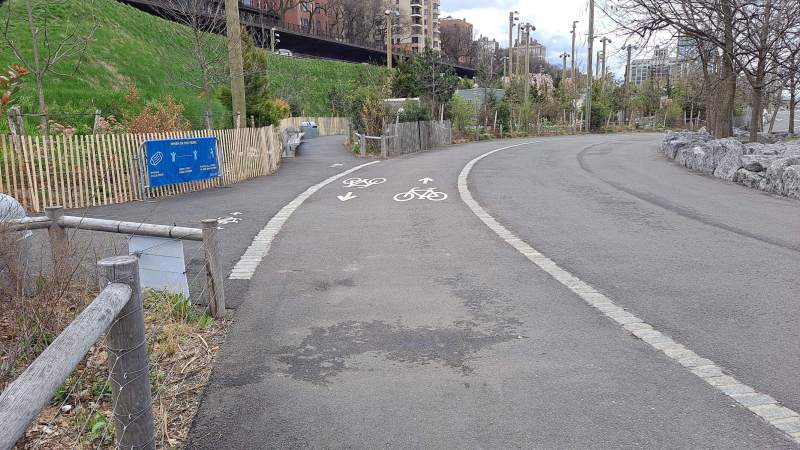 Remember the cobblestone rumble strips on the bike path alongside Pier 1? Of course you do! They were awful to ride on, and left a lasting – and negative – impression with a lot of users. Hopefully you saw the big news – they were pulled out and paved over last fall! The riding experience is smooth now – what you would expect for any other paved bike path in the city. 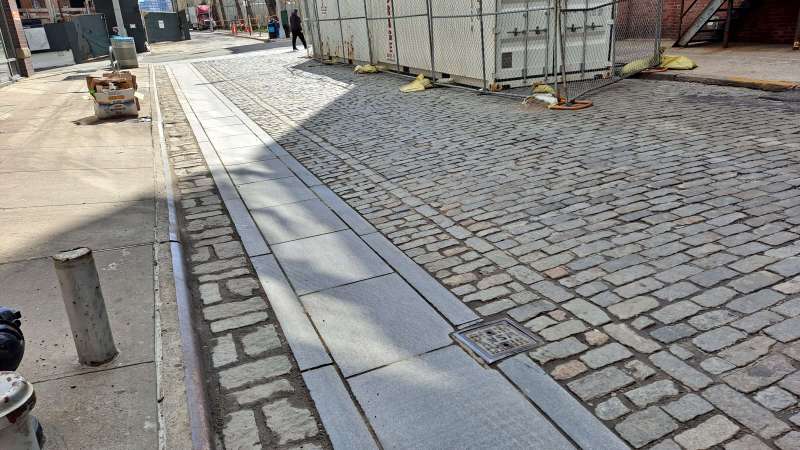 Speaking of cobblestones, be sure to check out Front and Water Streets in DUMBO. Several blocks of each street now feature granite bike lanes – first proposed for DUMBO in 2013, and implemented for the first time in Manhattan in 2015. Still a little rough for passing, side-by-side riding, or three-wheel cargo bikes, but these paths make the ride smoother for single-file riders going between Brooklyn Bridge Park and Flushing Avenue.