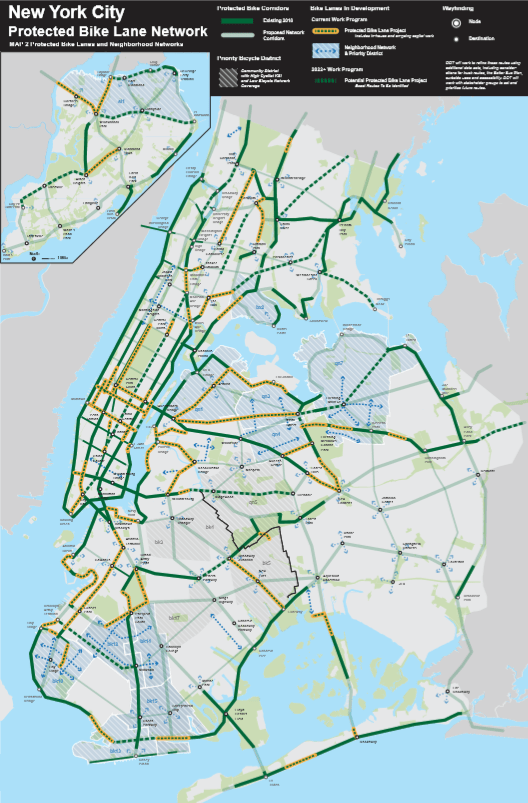 Brooklyn Greenway Initiative (BGI) is encouraged by the City’s inclusion of the Brooklyn Waterfront Greenway in its “Green Wave” plan announced Thursday, which combines design, enforcement, legislation, policy, and education to make the City’s streets safer for cyclists – and all street users.

The Brooklyn Waterfront Greenway is a planned 26-mile protected and landscaped route for pedestrians and cyclists of all ages and abilities that provides safe and continuous access to and along the waterfront, connects parks and open space, adds new mobility options for transit-starved communities, and creates connections to new job centers.

As a major trunk route in the larger Protected Bike Lane Network, the Brooklyn Waterfront Greenway serves the broadest range of commuting and recreational users, including some of the most vulnerable, such as families with young children, people learning to ride a bike, older adults out for a stroll, and people with disabilities who use adaptive bicycles or other means to maintaining an active lifestyle.

With 18 miles of Greenway already in use by millions of people annually, the Brooklyn Waterfront Greenway is 70% complete and only needs a few gaps connected: Greenpoint, DUMBO, Red Hook, Sunset Park, Gravesend, and Sheepshead Bay.

“Completing the Brooklyn Waterfront Greenway by 2021 is an exciting development,” said Terri Carta, BGI’s executive director. “But the ‘Green Wave’ Plan has to be considered a first step in a shift to safer, smarter, interconnected urban mobility system.”

The 2021 plan omits a less than 2-mile stretch of Greenway between Gravesend and Sheepshead Bay. BGI also urges NYC Department of Transportation to complete this segment by 2021, which would intersect with the country’s first greenway, Ocean Parkway, and complete the full route.

For 15 years, BGI has functioned as the catalyst for conceiving, designing, and implementing the 26-mile Greenway. BGI looks forward to continuing to lead an inclusionary process with local communities and the City to maximize benefits for Brooklyn’s 2.65 million residents, over 1.1 million employees, and 15 million annual visitors from across the City and around the world.

About Brooklyn Greenway Initiative
Brooklyn Greenway Initiative (BGI) is a 501(c)(3) non-profit organization committed to the development, establishment and long-term stewardship of the Brooklyn Waterfront Greenway – a 26-mile protected and landscaped route for pedestrians and cyclists that, when complete, will connect Brooklyn’s storied and iconic waterfront, parks and open space, commercial and cultural corridors, and new tech and innovation hubs for 2.65 million Brooklyn residents, over 1.1 million employees in Brooklyn, and 15 million annual visitors from across the City and around the world.

Founded in 2004, BGI works with community, non-profit, business, and governmental partners to create and fulfill a comprehensive vision for the Brooklyn Waterfront Greenway, while at the same time building awareness and support among residents and employees who live and work along its route. Since its founding, BGI has channeled more than $218 million in public and private investment toward implementation of the Greenway, leveraged public and private investment of $2.38 million toward the creation of the Naval Cemetery Landscape as a new park-like space adjacent to the Greenway, and conceptualized or supported the development and stewardship of other open spaces and public amenities along the Greenway. Approximately 18 miles of completed Greenway are actively used by tens of thousands of cyclists and pedestrians daily.