Meet the Native Bees of NYC!

The Naval Cemetery Landscape is home to dozens of native bee species, butterflies, dragonflies, and various other pollinating insects. The Landscape’s design incorporates nectar rich annuals and native perennials, creating crucial habitat in the urban setting. In order to learn more about the insect biodiversity at the NCL, last year we invited Sarah Kornbluth, bee biologist from the American Museum of Natural History, to do a short survey of our pollinator population. The results were incredible!

In order to further the understanding of NCL’s pollinator population and use the findings for research, this year the NCL is inviting visitors to come and make their own bee observations, and upload their findings to iNaturalist during our season-long BioBlitz. All of the native pollinators identified at the NCL this season will be used by staff to inform their landscaping practices and create better pollinator habitat, in addition to being used as data for the Empire State Native Pollinator Survey, currently being conducted by the New York Natural Heritage Program.

We asked Sarah to tell us a little bit more about the native bees that she identified last year, so that visitors know what to look for when they visit the NCL! Keep your eye out for these flower forages next time you’re at the NCL, and anywhere along the Brooklyn Waterfront Greenway.

I had the pleasure of visiting the Naval Cemetery Landscape in late July of 2019. Danielle and Greg, NCL Associates, gave me a fantastic tour, describing the ongoing and planned landscaping work and then joined me in observing and collecting a variety of flower foragers. In just a couple of sunshiny hours that day, we collected three species of bumble bee, one species of carpenter bee, two species of sweat bee, three species of leaf-cutter bee and a cuckoo-leaf-cutter bee. Below are ten of the bees that you might see next time you visit the NCL! I’m very excited to see what other kinds of bees people spot and post on iNaturalist during the NCL’s full season BioBlitz! 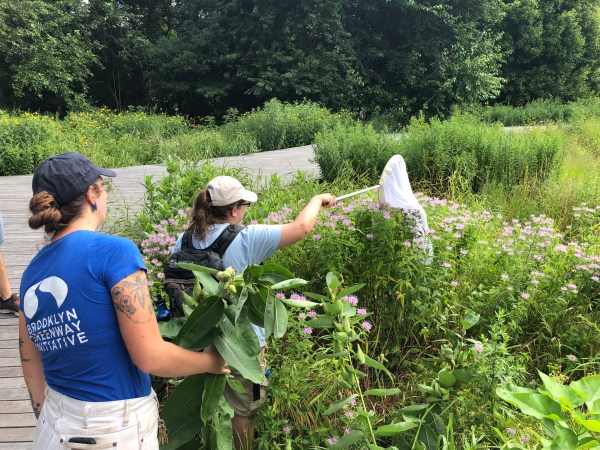 Sarah demonstrating the netting technique, which is used to capture samples for identification.

We collected three different species of bumble bee; The Golden Northern Bumble Bee (Bombus fervidus), The Brown-belted Bumble Bee (Bombus griseocollis), and The Common Eastern Bumble Bee (Bombus impatiens). Bumble bees are social and live in colonies that can have up to a few hundred bees. If you look closely, you can tell these bees apart by the pattern of yellow and black hairs on the seven horizontal abdominal segments. The Golden Northern has all or almost all yellow hairs on its abdomen. The Brown-belted has yellow hairs on the first segment as well as the second segment. The hair color varies from yellow to brown, but it is not fully black. The Common Eastern only has yellow hairs on only the first abdominal segment and all the rest of the segments have black hair. Take pictures if you see them, maybe you’ll spot a fourth species! 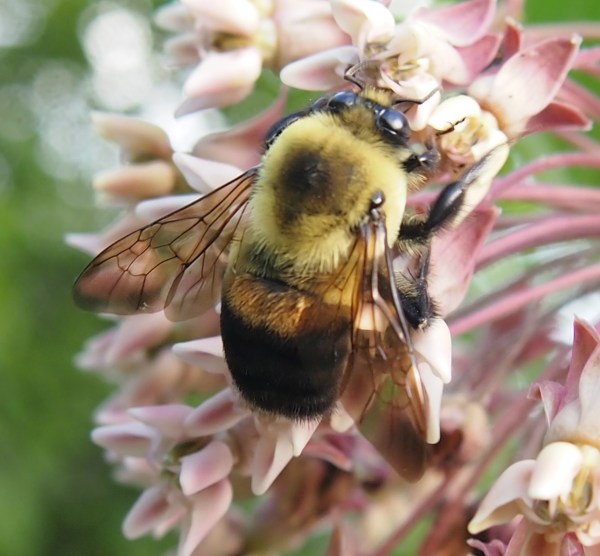 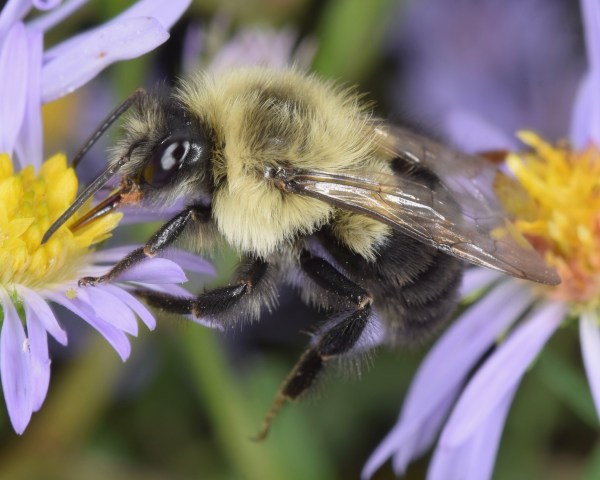 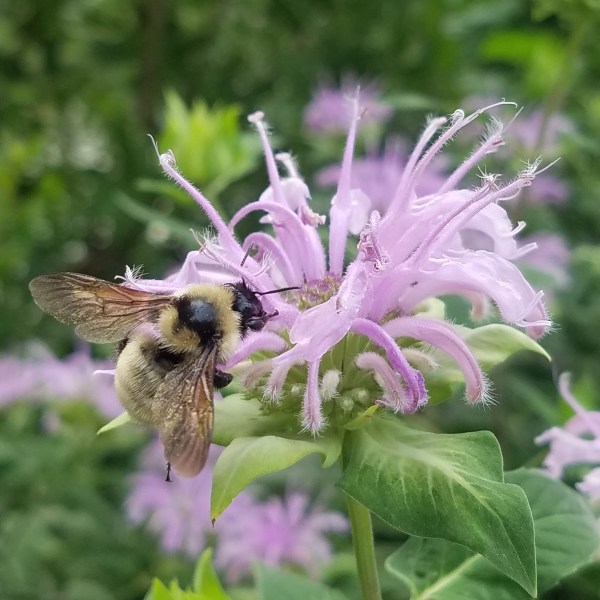 We only have one species of large carpenter bee in the Northeastern United States. The Eastern Carpenter Bee (Xylocopa virginica) is a beautiful and robust bee about the size of a large bumble bee. The Eastern Carpenter Bees is the only kind of bee in our area that excavates its nest in solid wood. It uses its mandibles to drill a deep hole that has a 90° angle in it if necessary, and it lays its eggs safely within. One difference that may help you differentiate it from bumbles is that while it has yellow hairs on its first abdominal segment, the rest of its segments are relatively bare and so its abdomen appears shiny instead of fuzzy. You can also tell the difference between the males and females because the face of the female is all black while the male’s has a big yellow spot. 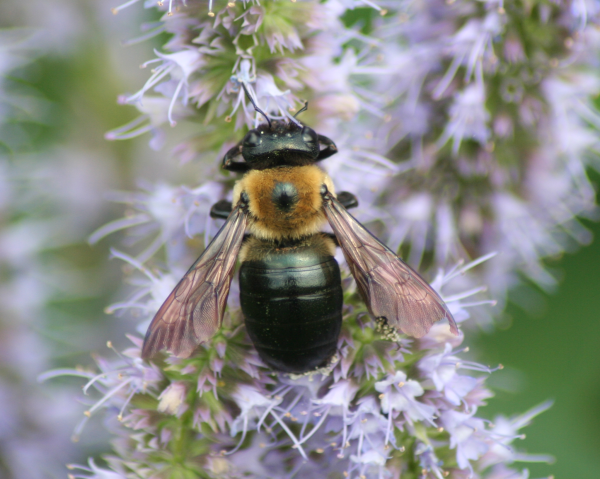 We collected two species of sweat bee; the brightly colored Green-Sweat Bee (Augochlorella aurata) and the Ligated Furrow Bee (Halictus ligatus). The jewel-like Green-Sweat Bee is around half a centimeter long while its brown cousin is closer to a centimeter long and has white abdominal stripes. Both are floral generalists and visit whichever flowers are fresh and full of nectar at the moment. Both are also soil nesters building an underground tunnel with tiny rooms off to the sides for their young. 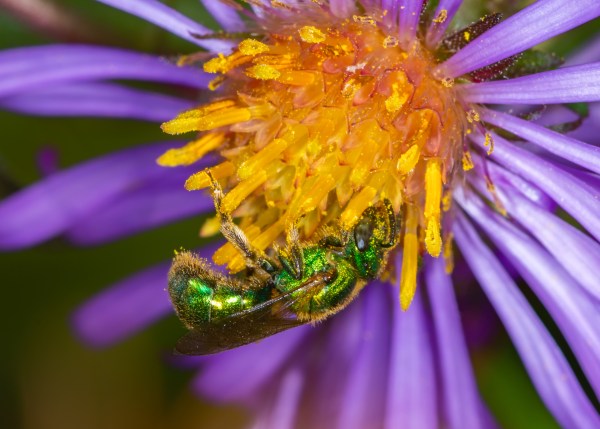 We collected three species of leaf-cutter bee; Megachile pugnata (11-18mm), Megachile texana (10-14mm), and the Alfalfa Leaf-cutter (Megachile rotundata, 7-9mm). While these bees can be difficult to identify without a microscope, the leaf-cutter females can be spotted because they (and others in family Megachildae) carry the pollen that they collect on the underside of their abdomen instead of on their legs as most bees do. Megachile pugnata is one of the fascinating bees that researchers have discovered to have favorite flowers. M. pugnata’s favorites are in family Asteraceae. The Alfalfa Leaf-cutter is not native to our continent. It was deliberately introduced from Eurasia starting in the 1920s to pollinate alfalfa (which is also not native to our continent). 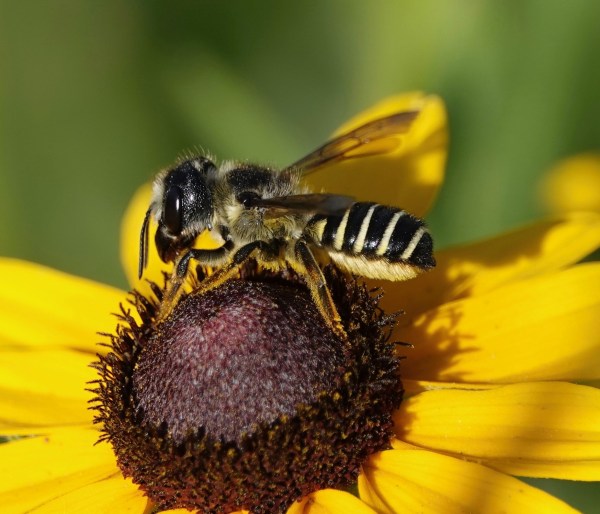 We collected the very cool Eight-toothed Cuckoo-leaf-cutter Bee (Coelioxys octodentata). Cuckoo bees have evolved in multiple bee groups. They are often less fuzzy than other bees because they don’t need to collect pollen to feed to their young. Instead, they lay their eggs in the nests of other bees, just like cuckoo birds! I was excited to find a cuckoo bee in NCL because they can be a sign that an ecosystem is functioning well enough to support a robust population of the host bee. In this case, the Eight-toothed Cuckoo-leaf-cutter Bee has been known to lay its eggs in the nests of Megachile brevis, M. centuncularis, and M. mendica. We didn’t catch any of those species, but I bet that one of them is there! 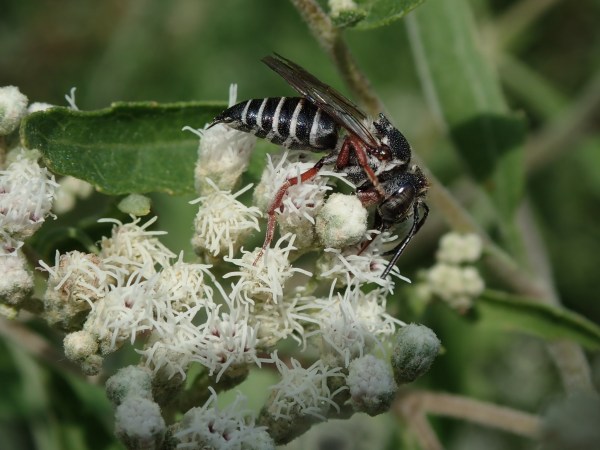 What else didn’t we catch? I’m sure that iNaturalist observations from NCL will show even more kinds of bees present. Some species, like bumble bees, can be seen visiting flowers from early spring through late fall, but others have shorter flight seasons and may only be out in spring, for example. There are a few other groups that might be spotted, so get your phone out and ready. I like to zoom in the camera on my phone about half-way before I take pictures of insects, see what works best on yours. 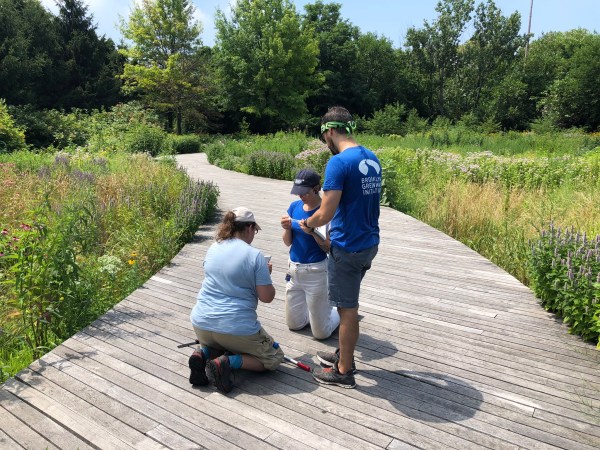 Mason Bees (Genus Osmia): These relatives of leaf cutter bees also carry pollen on the underside of the abdomen, but instead of using leaves in their nest building, they use mud. They are small to medium sized bees and they range in color from dark brown to metallic blue. 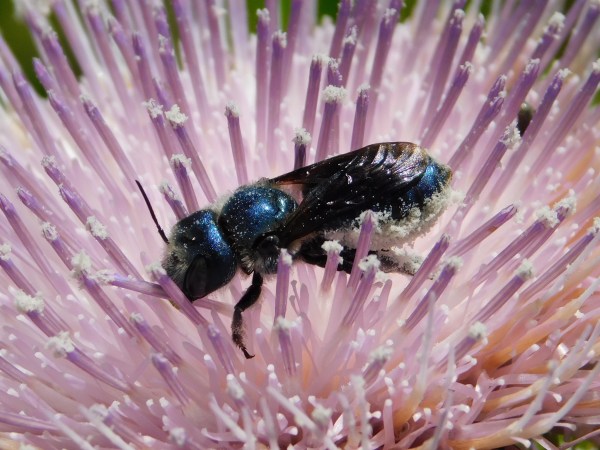 Small Carpenter Bees (Genus Ceratina): These small bees could be easily overlooked on flowers. They are not very fuzzy or stripy, and they are a slightly metallic shade of navy blue. Often they have a small pale yellow facial marking. Their closest relative in the area is the Eastern Carpenter Bee, but at 5-8mm, they don’t have a strong family resemblance! 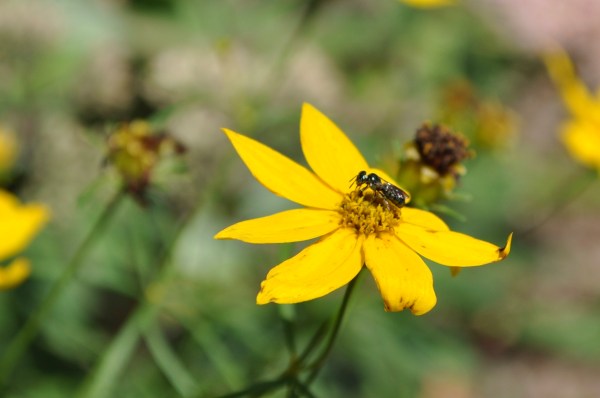 Yellow Masked Bees (Genus Hylaeus): Another group of little bees, these have minimal fuzz and they carry the pollen they collect in a special place in the upper part of their digestive tract. With so few hairs, they look almost wasp-like. 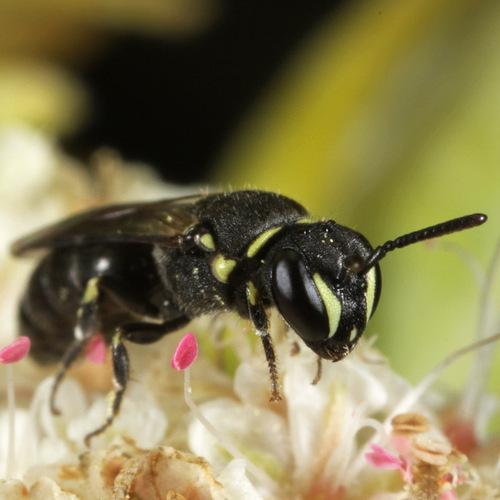 Sarah Kornbluth is a bee biologist who conducts ecological research and surveys to examine bee communities and explore varying habitat management regimes and intensities. She has worked on power line rights-of-way across the country, in agricultural areas, and in urban and suburban sites. She is an expert at identifying bees to species. Sarah is a Field Associate at the American Museum of Natural History.