Why Plant Natives? The Ecological Importance of Native Species

When you add native plants to your garden, you are directly benefiting the survival of native animal species, some of which may be threatened with extinction due to habitat loss. It is in this spirit of environmental conservation, and in the interest of public well-being, that Brooklyn Greenway Initiative incorporated native plants and trees into the design of the Naval Cemetery Landscape. Through the NCL, we hope to demonstrate the power and interconnectivity of a native plant community. Below we will dive deeper into this subject, both above and below ground.

Native plants are recognized and enjoyed by native animals. Some animals have evolved to form specialized relationships with plants in which one or both species depend on each other for survival. Such mutualistic connections are best known between milkweed and the monarch, however they can also be found between ants and spring ephemerals, tree roots and fungi, bumblebees and wildflowers, and beyond.

The life sustaining benefits of native plants radiate in all directions, beginning with arthropods and insects (who provide nutrition for small mammals and birds), and extending to creatures as large and diverse as the great horned owl, black bear, or the American beaver. It is in this sense that native plants form the cornerstone of a food web that ripples across every spectrum of life.

The ecological benefits of native plants persist beneath our feet. The roots of native plants such as hazel alder and black locust form symbiotic relationships with bacteria, a partnership that results in nitrogen, an essential element in plant growth and soil fertility. The presence of nitrogen-fixing natives will boost nutrients for every plant nearby, and thus benefit the whole plant community. The underground areas around plant roots (known as the rhizosphere) are hubs for microorganisms who feed on the proteins and sugars that roots secrete. This activity around plant roots can be thought of as a mirror image of the nourishing action that the same plants are providing above ground.

Plant roots that are both fibrous and widespread (such as those belonging to buffalo grass or little bluestem) are crucial in the stabilization of topsoil, particularly in flood prone areas. Common aquatic plants such as cattail can absorb and recycle pollutants before they assimilate into rivers and streams. Without the protective barriers of native riparian plants, the waters of the United States would be inundated with eroded soil and pollutants, with devastating results for our drinking water and freshwater ecosystems. Storms would meet no resistance and their floodwaters would undermine the foundations of forests and cities alike.

So, plants do amazing things, but why do they have to be “native”?

You may wonder why a plant must be native to a country, state, or region in order for said plant to truly enhance the quality of life for other members of the ecosystem. If a raspberry bush found in Australia makes large, nutritious fruit, surely the birds would enjoy it here in New York? If a grass found in Japan is great for soil stabilization, maybe we could plant it along the Hudson River? The answer to such questions lies in evolution.

Plants that evolve together will eventually develop an efficient means of co-existing in which one plant’s growth habits will not interfere with the other, thus creating harmony in the ecosystem. When plants that do not “know” each other meet, they will almost always form an inefficient, destructive relationship in which one or both plants are killed or damaged. An excellent illustration of this evolutionary truth is found when comparing virginia creeper, a vine native to the United States, with an invasive vine such as kudzu. Because Virginia creeper evolved with our native trees, it has slowly “learned” that covering the tree’s canopy will deprive the tree of sunlight, and eventually kill the tree. It is not in the interest of a vine to fell the tree that allows it to bask in sunlight, while soaking in water that drips from the tree’s leaves. For this reason, Virginia creeper has evolved to remain only on the tree’s trunk, thus permitting the survival of its host. Kudzu, on the other hand, has not naturalized among our tree population, and its aggressive behavior has destroyed acres of forest in the southern United States. 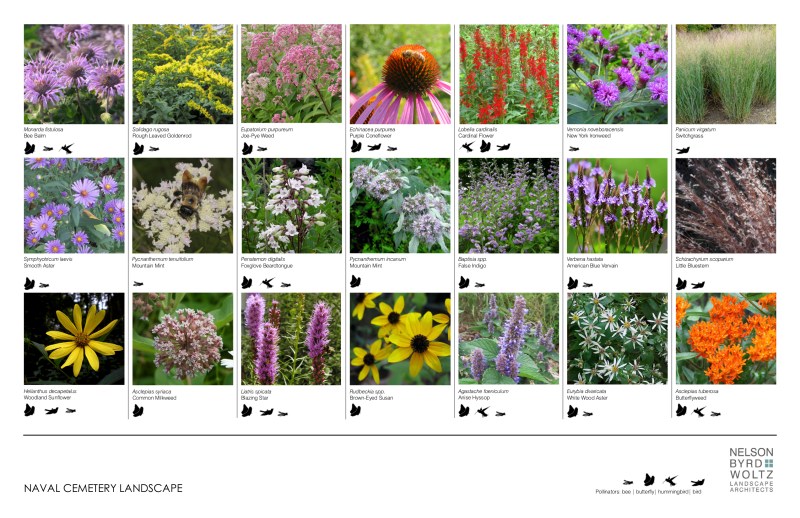 Because native plants are adapted to their local climates, they do not need water or nutrients in excess of what the environment already provides. Many native plants are perennials, meaning their root systems persist year round. Having a garden of perennials means not having to disturb the soil and replace plants on a seasonal basis, and that means less fossil fuel emissions into the atmosphere through transportation (truck driving) and climate control (heated greenhouses) of non-native plants. Native plants are very efficient in storm water absorption, which reduces run-off into the already over-flooded NYC sewer system.

Native plant gardens also provide opportunities to observe nature in action, be it pollinators visiting flowers, songbirds perching in bushes, or earthworms carving through fertile soil. Watching these plant and animal relationships unfold before your eyes can instill a deep appreciation of the value and interconnectivity of our ecosystems. Visitors can go further to learn what species are native to your area and how they can support their survival.

When you visit the Naval Cemetery Landscape, you will find that our associates are more than happy to go further into detail about any facet of the ecological design and intention of the meadow. As a satellite of the Brooklyn Waterfront Greenway that physically connects our neighborhoods, we at the NCL hope to foster interpersonal connections with members of the community, and to encourage the public to form their own connections with nature.