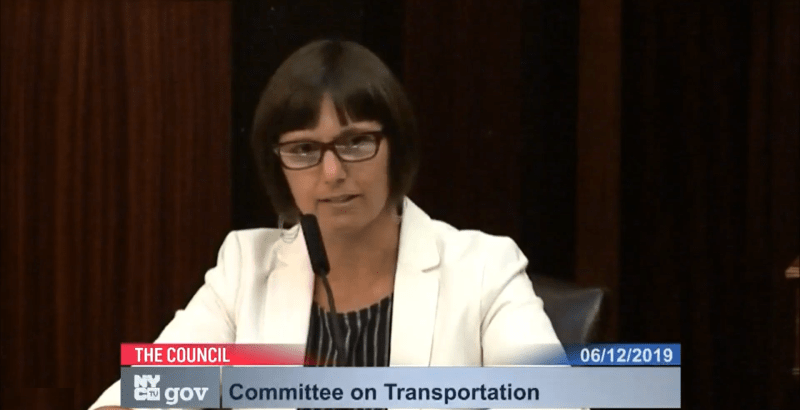 Brooklyn Greenway Initiative (BGI) is a private nonprofit that has been focused for nearly two decades on the development, establishment, and long-term stewardship of the Brooklyn Waterfront Greenway – a 26-mile protected landscaped route for pedestrians and cyclists of all ages and abilities that provides safe and continuous access to and along the waterfront, connects parks and open space. The Greenway adds new mobility options for transit-starved residential and business communities, and connects workers to new and growing job centers along the waterfront and to the Manhattan and Queens Greenway networks.

BGI enthusiastically supports the proposed bill and the vision it puts forth for our City, particularly around the safety, mobility, and quality of life improvements it will deliver. BGI is especially excited about the bill’s focus on building a complete network and its requirements to measure and report the “connectivity index” on an annual basis and as the Master Plan is updated in 5-year intervals.

Our experience with the Greenway is that as segments are implemented they become immediately popular and are used by commuters, recreational runners and cyclists, families, and even local businesses delivering goods to market in small cargo bikes. Perhaps the best example of this is the Greenway segment along Kent Avenue in Williamsburg. In 2012 DOT took a bold step to reconfigure Kent Avenue to allow for a bi-directional protected bike lane and separate pedestrian route. Now, it’s one of the most heavily used commuter routes in all of NYC; and on the weekend it’s packed with local residents and others visiting waterfront parks, the shopping corridor, and local restaurant scene.

This success story has been repeated for the Greenway segment from Brooklyn Bridge Park through Red Hook, along the Shore Parkway Greenway, among others, demonstrating the incredible public demand for and the immediate benefits afforded by the Greenway. However, it can’t fulfil its full potential until remaining gaps are filled and the route is fully connected.

BGI also applauds the proposed bill’s focus on accountability to bold targets and supports all efforts that enable DOT to take a more strategic and pro-active approach to implementation of the Greenway and other protected facilities for cyclists and pedestrians. We strongly believe that the connectivity index is the way to ensure that targets are met in the most impactful way. The previous approach toward implementation “as funds and opportunities arise” simply isn’t sufficient.

Implementation funds need to be fully allocated, not “found.” Coordinating support for the bold targets outlined in this bill among City agencies and within our communities is the only way we can reach these goals.

Closing major gaps in the Brooklyn Waterfront Greenway – in Red Hook, Sunset Park, Coney Island, and DUMBO – should be addressed within the scope of the first Master Plan to be issued on October 1, 2019, which would deliver a completed Greenway by October 2024. It can be done within 5 years when we’re all aligned on goals and targets, and would immediately benefit Brooklyn’s 2.65 million residents, over 1.1 million employees, and 15 million visitors from across the City and around the world.

BGI looks forward to continuing to work with the City and other stakeholders to move the Brooklyn Waterfront Greenway to completion as a critical trunk route in the overall network. A leading factor to growth in Greenway use is the perceived and very real safety benefits that such a protected route offers. Prioritizing completion of the Greenway will move us more swiftly toward Vision Zero standards as greater numbers of people, using all mobility options, live and work along the waterfront.

Thank you Speaker Johnson for bringing this conversation to the fore with Council Members Rivera, Rodriguez, Levine, Reynoso, Constantinides, and Rosenthal. And thank you Chair Rodriguez and the Transportation Committee for the opportunity to testify before you today.

Brooklyn Greenway Initiative (BGI) is a 501(c)(3) non-profit organization committed to the development, establishment and long-term stewardship of the Brooklyn Waterfront Greenway – a 26-mile protected and landscaped route for pedestrians and cyclists that, when complete, will connect Brooklyn’s storied and iconic waterfront, parks and open space, commercial and cultural corridors, and new tech and innovation hubs for 2.65 million Brooklyn residents, over 1.1 million employees in Brooklyn, and 15 million annual visitors from across the City and around the world.

Founded in 2004, BGI works with community, non-profit, business, and governmental partners to create and fulfill a comprehensive vision for the Brooklyn Waterfront Greenway, while at the same time building awareness and support among residents and employees who live and work along its route. Since its founding, BGI has channeled more than $218 million in public and private investment toward implementation of the Greenway, leveraged public and private investment of $2.38 million toward the creation of the Naval Cemetery Landscape as a new park-like space adjacent to the Greenway, and conceptualized or supported the development and stewardship of other open spaces and public amenities along the Greenway. Approximately 18 miles of completed Greenway are actively used by tens of thousands of cyclists and pedestrians daily.